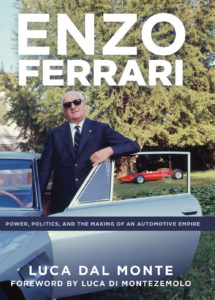 ENZO FERRARI – POWER, POLITICS AND THE MAKING OF AN AUTOMOTIVE EMPIRE

Until now, no biography has truly captured the entire scope of Enzo Ferrari’s remarkable life and its impact on automobiles, motor racing, and Italian industry and culture.  Drawing on more than a decade of original research, I believe that I have uncovered a wealth of new facts about Ferrari’s origins, ambitions, business practices, and private life as to redefine the long and complex life of this controversial 20th Century giant.

ENZO FERRARI: POWER, POLITICS, AND THE MAKING OF AN AUTOMOTIVE EMPIRE revisits all the highlights of Ferrari’s rise to greatness: his driving career in the 1920s; his management of racing teams for Alfa Romeo in the 1930s; the launch of his own company and team in the late 1940s, and his unprecedented successes building cars for the road and race track in the following decades.

But it also examines lesser-known and sometimes hidden aspects of Ferrari’s career, from his earliest failed business ventures to his political dealings with Italy’s Fascist government before and during WWII, Allied occupiers, and Communist leaders in post-war Italy. It also sheds new light on Enzo’s troubled relationship with his idea of God, and the all-out fight the Vatican waged against him after the multiple race deaths of drivers and spectators in the late 1950s.

It also lays bare the internal politics of the Ferrari Company and team; both led by a man who manipulated employees, drivers, competitors and the media with a volatile mixture of brute force, paranoia, and guile. At the same time it analyses in depth Ferrari’s personal relationships with women—most notably his wife Laura and long-running mistress Lina Lardi. And the infatuation that at age 60 he developed for a 24-year old former girlfriend of one of his dead racing drivers.

The Enzo Ferrari that emerges from these pages is an immensely complex man—one who could be ruthless and unashamedly vulgar, but also unexpectedly vulnerable. But no matter what challenges he faced in business, at home, or on the racetrack, Ferrari never lost his essential optimism and unwavering faith in life and in himself.

ENZO FERRARI: POWER, POLITICS, AND THE MAKING OF AN AUTOMOTIVE EMPIRE was first published in Italy in the fall of 2016 with the title FERRARI REX. Met by flattering reviews, it has since become an Italian best seller, winning the prestigious “Premio Selezione Bancarella Sport” national literary award.

My American publisher – David Bull Publishing – who has purchased the rights for translation and publication in all the English-speaking markets of the world, says that ENZO FERRARI: POWER, POLITICS, AND THE MAKING OF AN AUTOMOTIVE EMPIRE “is the definitive biography of Enzo Ferrari, one that makes previous accounts obsolete.”

What I can say is that, as a native Italian and one time Ferrari employee, I have gained access to public and private archives – and as a Modena resident I have conducted scores of interviews with members of Ferrari’s inner circle, as well as reviewing the personal papers of Enzo Ferrari and many other insiders. With all the people that have opened their doors and their hearts to me during my research, I am profoundly in debt.[:]